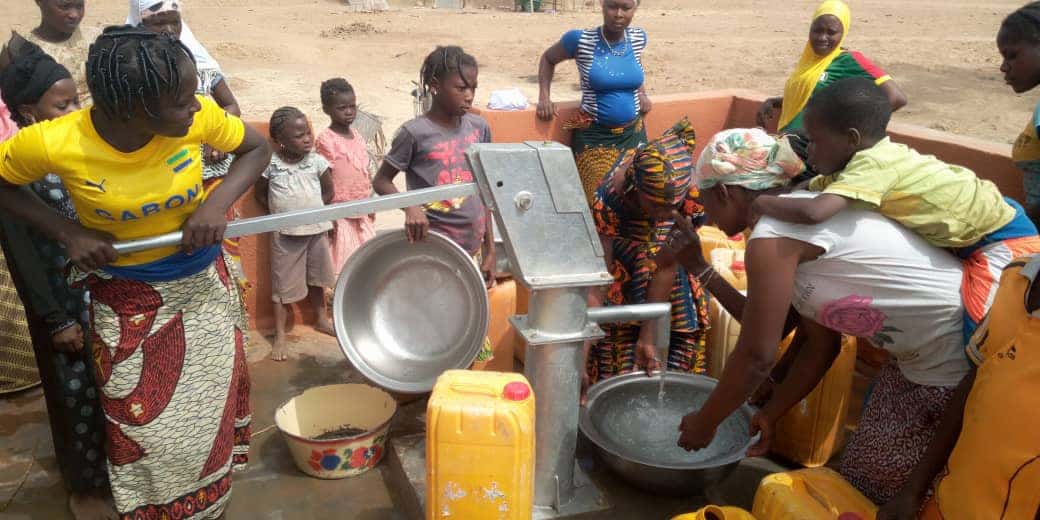 On any given day in the village of Loanga, Burkina Faso, you’ll find locals surrounding a well. By way of a simple hand pump, it draws clean drinking water from an underground aquifer for this village of 3,000 and represents one of the few examples of infrastructure for miles around.

The story of how the well got here is one for the ages. In fact, it never would have been drilled had it not been for Ahmed Kere, a favorite son of Loanga, a young man who positively impacted people from around the world before his death in January of 2016. In a very real way, the well also represents the continued presence of The Sonder Project in Burkina Faso.

It was in 2015 that The Sonder Project first partnered with buildOn, an international nonprofit building schools in remote corners of the world. That year a group of volunteers journeyed from Santa Rosa Beach to Burkina Faso where they first met with Ahmed, the in-country project facilitator, and Martin Nansia, the project’s Burkinabe translator.

The collective experience would have an impact no one could have predicted. The volunteers were awed by the Burkinabe culture and stunned by the incredible need – the kindness and gratitude of the people coupled with the scarcity of food and clean water. They also grew close to Ahmed and Martin. The experience proved so profound that plans were made for a second trip to build a second school and begin drilling water wells in the area. In many ways the experience marked the official formation of The Sonder Project.

The first move upon their return to the States was to fly Ahmed and Martin to Santa Rosa Beach to help get the ball rolling. What followed was an extraordinary cultural exchange for everyone involved. By day Ahmed and Martin took up surfing and swimming, and by night they collaborated on development projects for Burkina and met with Santa Rosa Beach locals who could help with fundraising. With momentum building, a trip was scheduled for volunteers to make the trip to begin construction on the next school.

Then everything changed. News that no one expected arrived just days before the group was scheduled to leave.

It isn’t everyday that events in Burkina Faso make international headlines. But there would be nothing normal about January 16, 2016. That afternoon, some 8,000 miles from Santa Rosa Beach, Ahmed and Martin happened to be at a hotel restaurant popular with international travelers in Ouagadougou, the capital of Burkina Faso. They were there with another group of buildOn volunteers and employees celebrating the completion of another school. In the midst of the dinner celebration, gunfire broke out with gunmen shooting at the crowd indiscriminately.

Most of the buildOn volunteers and employees managed to take cover in one of the restrooms. Ahmed, however, was one of the exceptions. Always ready to solve problems through discussion, he stood up and attempted to appeal to the attackers — but the gunmen were having none of it. In the face of terror, standing up would be Ahmed’s last act.

A standoff ensued with government security forces in the hotel across the street, as the restaurant was engulfed in flames. The surviving buildOn crew managed to escape the burning building, but the casualty count was horrific: 30 people killed and 56 injured. An al Qaeda-linked group claimed responsibility.  This was the first such attack in Burkina Faso.

Back in Santa Rosa Beach, the effect on the Sonder Project volunteers who had come to know Ahmed was visceral. Naturally, they wanted to do something. Their trip to Burkina Faso, scheduled just a few days later, would have provided a catharsis – and yet it was immediately cancelled.

Ultimately, however, the attack would have a more lasting effect. Perhaps most significantly, it deepened The Sonder Project’s commitment to the country of Burkina Faso, as we hired Martin as our in-country project manager to directly oversee the impact of our efforts. We have since built a total of four schools, installed seven water pumps, and established two community farms in Burkina Faso.

In September of 2018, Sonder Project’s CEO, Chad Zibelman, flew to Burkina Faso to evaluate our ongoing work. While there he met with Ahmed’s father.

“So many people have come here to pay respects,” his father said.

He was especially moved by the tributes from around the world that had been made in his son’s honor – and yet he had one special request.

“None of the people in our home village of Loanga know what Ahmed has accomplished,” he said. “I wish someone would do something there to commemorate his life.”

A month later Martin traveled to Loanga with Ahmed’s father to assess the needs. At the top of the list: A well.

Back in the U.S. plans were underway for the installation. The Sonder Project reached out to donors with a fundraiser that yielded the $11,000 needed to complete the project. Drilling began in February of 2019 and the well completed the following month.

A plaque was set up, commemorating Ahmed. Today, as his fellow townspeople arrive with their empty containers, they can’t help but see it just a few feet away. As they draw clean water up from the underground aquifer, they’re inevitably reminded of the impact Ahmed Kere had on so many lives.

With every motion of the pump handle, they understand that those lives now include their own.

In English, the plaque reads: “Gift of THE SONDER PROJECT to the village of Loanga, of the Province of Boulgou, in the Department of Tenkodogo, in the Region of CBetweenis, in the memory of Ahmed KERE.  May Ahmed always be remembered for his love of people, his passion for discourse and his service to others.
Drilling carried out by company The Solution SARL The 10th of February 2019”