STORY FROM THE FIELD: Tish Ogden 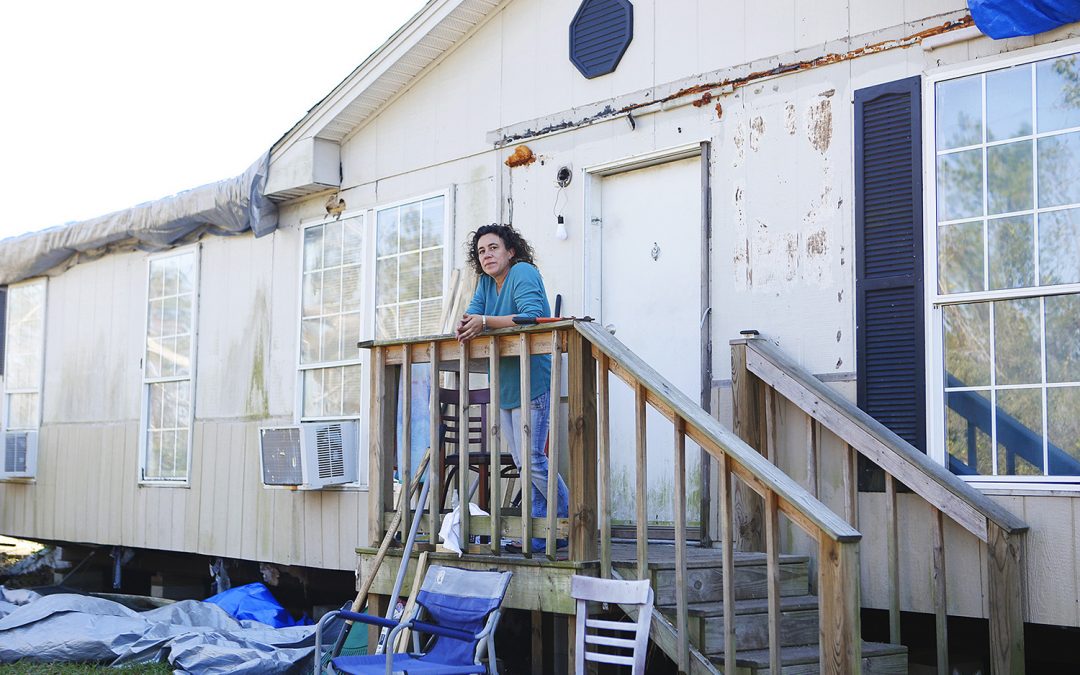 Four Walls and a Blue Roof

The day after Hurricane Michael made landfall at Panama City, Tish Ogden and her boyfriend, Mike, returned to their home in Bayside, a low-lying community just north of the Hathaway Bridge.  As they drove through the battered neighborhoods, she was overcome by a mounting sense of dread.

“We had to walk the last mile on foot due to downed trees and powerlines,” she recalls.

Approaching their home – a doublewide trailer standing just a few feet above sea level – she saw that they were now effectively homeless.

The front door had blown away, exposing the interior to rain driven by 140 mile per hour winds.  Flood waters and debris had ripped out the plumbing from under their doublewide trailer, allowing sewage to back up — and they had no power.  A massive pine had fallen on the home, breaching the roof over her kitchen and bedroom.  Incredibly, towels sucked by the storm from her laundry dryer were now caught up in the branches of downed trees across the street.

Later that day Tish made her way to the restaurant in Panama City Beach where she worked as a waitress, only to learn that the business had been destroyed.  Her boyfriend, a disabled vet, had nearly lost his leg in a recent motorcycle accident and had been wheelchair-bound up until six weeks before the storm.

Tish was about to be tested as she had never been tested before, facing what she calls “The longest hell.”

“There was a time when I questioned whether or not I was going to make it,” she says.  “I had my daughter, Chloe, and I had Mike.  What else did we have? Four walls and a blue roof.”

Daily life was now like camping out for Tish and her family.  And there was no reason to think it was going to change.  Two weeks after the storm, she found herself at the end of her rope, as they still had no electricity, no running water and not much of a roof over their heads.  The heat was oppressive and the rain inescapable.

They needed help, and needed it right away.

Tish had heard from friends in the neighborhood that The Sonder Project, based in Santa Rosa Beach, had volunteers on the ground throughout the area.  The problem, she feared, was that their resources were surely stretched to the limit, as devastation from the storm stretched for miles in every direction.  But there was nowhere else to turn.  One morning at 7:00 a.m. she managed to get online and reached out to The Sonder Project via Facebook:

“I know this may be a long stretch, but I will ask,” she wrote.  “We need some help.  My boyfriend, a disabled vet, was injured six months ago.  He has not been cleared for work yet.  I lost my job due to the hurricane. As of now the mold has set into my home.  We are twelve days into the hell of a war zone…”

She hit send and waited.

And then came a surprise.  A few hours later, Kim Catellier, The Sonder Project’s Director of U.S. Operations, responded, saying help was on the way.

“Within a few days the plumbing was fixed, Tish recalls.  “Jeremy and Alec got a power pole up and they had the electric company running a new line to the house.”

Then came the roof.

As the days and weeks passed, there was a gathering sense that Tish’s life was returning to a state resembling something closer to normal.  Three months after the storm’s landfall, the restaurant where she worked as a waitress reopened; on weekends she and Mike continued work on their home, making one repair after another.

But the key to a full recovery, Tish realized, was in giving back to her community.

“It’s like glitter,” she says.  “I wanted to sprinkle it everywhere.”

She began by volunteering for a local donation drop off, serving those who were still homeless, and bringing in local stray cats and dogs — four-legged refugees of Hurricane Michael.

“It’s comforting to know that there are people who are… so good,” she says of The Sonder Project’s volunteers.  “I want to raise my children to be good in the same way.”

Strong women have a way of making everyone around them stronger, a reality that can’t be lost this month as we celebrate women Internationally.

Tish Ogden is just such an example.